Furniture Crafting is a feature in Elder Scrolls Online that allows players to craft furniture for themselves, their friends, or to sell to others! This page contains furnishing crafting information related to Housing Decoration for the Player Housing update released in 2017 and continuously updated afterwards.

To craft a furnishing, you will need to obtain a specific furnishing plan, similar to the way existing Provisioning recipes work. Plans can be found in containers across the world, purchased from certain merchants, dropped from monsters, or even obtained from pickpocketing (or murdering) the citizen of Tamriel. Higher quality plans will require knowledge from multiple tradeskills. For example: An elaborate canopy bed may require rank 9 in the passive skill Woodworking, rank 7 in Tailoring, and rank 3 in Metalworking. Each plan is unique, and certain special plans may require custom ingredients be located and included.

All tradeskill (crafting) disciplines now have a new tab at their respective stations for furnishing plans.

If you own a home in Tamriel, you'll need to furnish your newfound space with furniture. One way to get the furniture you so desire is to craft it yourself! Read on to learn the basics of Furnishing Crafting.

What is Furnishing Crafting?

Furnishing Crafting allows you to craft furniture to place in your home, or to sell to other players for a profit. Furnishing Crafting is an extension of the six primary tradeskills: Blacksmithing, Clothier, Woodworking, Enchanting, Alchemy, and Provisioning.

Who can participate in Furnishing Crafting?

Anyone! You don't actually need to own a home to craft furnishings and some furnishings can be made with the most fundamental skills so it's easy to get started.

Where do I go to craft some furnishings?

You can craft furnishings at any crafting station. When used, you'll find a new tab for Furnishing plans related to that station's tradeskill.

Where do I get Furnishing Crafting plans?

Much as with conventional food recipes, furnishing plans can be found stashed in buildings, backpacks, or within pockets of NPCs throughout the world. Occasionally, you can even find some in ruins or dungeons. If you're stealing furnishing plans, though, try not to get caught!

What are the names for plans within each tradeskill?

What materials does each tradeskill use for Furnishing Crafting?

In addition to various conventional materials, like style materials such as Adamantite, Manganese, or Nickel, and tiering materials, such as Dreugh Wax or Dwarven Oil, furnishers use new materials that have no level associated with them.

Why would I want to do Furnishing Crafting? What kinds of things can I create? 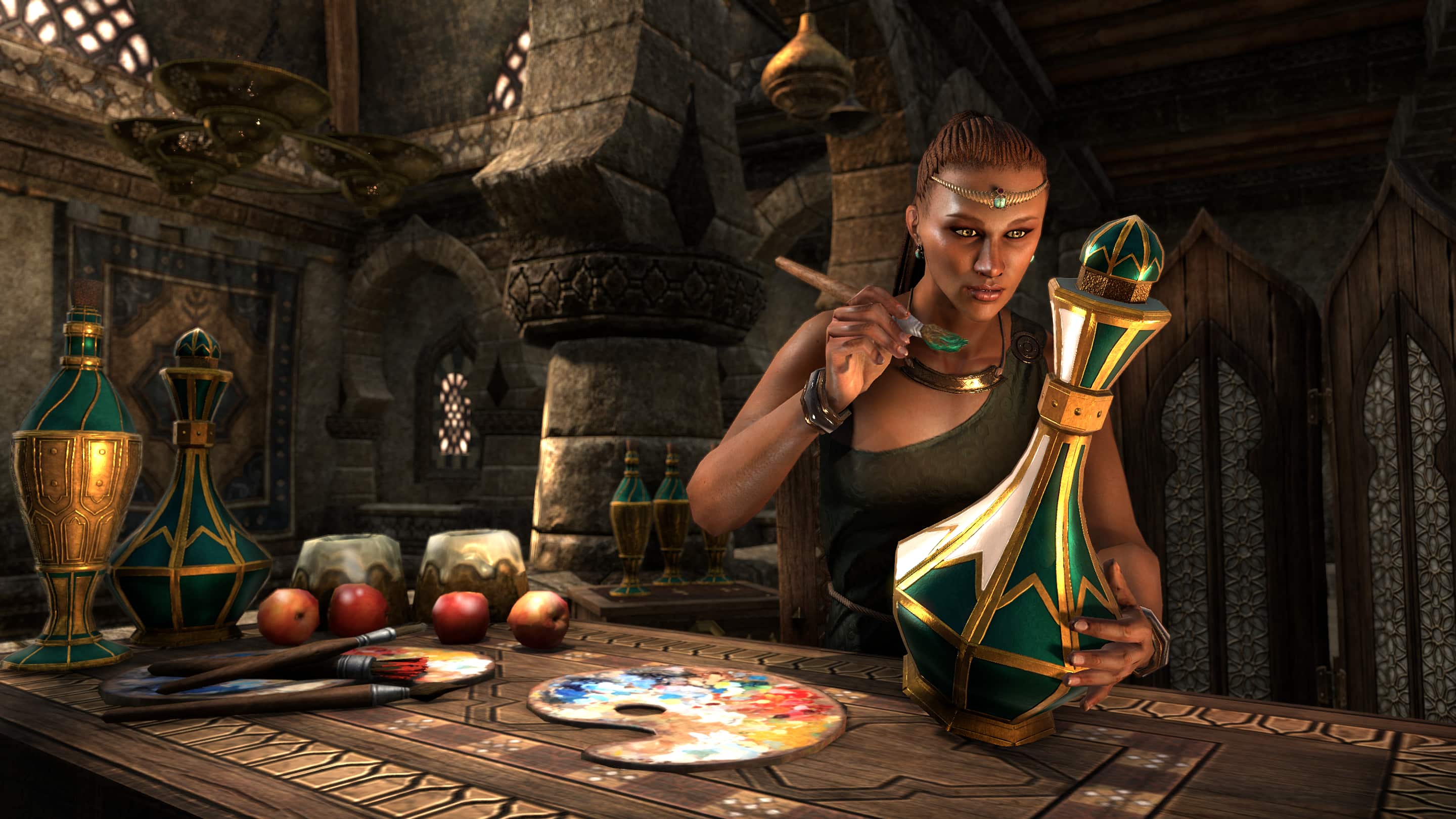 If you have a home, Furnishing Crafting is a great way to acquire new decorations to place in your home. If you don't own a home, though, you can sell those furnishings to other players. And if you're still making your way to the peak of your crafting skill, furnishings are another way to gain more Inspiration toward that journey.

You can make all kinds of things! Tables, chairs, lanterns, treasure chests, coffins, thrones, and more are all possible.

Are there any really cool, unique items that are only available via Furnishing Crafting?

Yes! As an example, you can craft enchanted humanoid Target Skeletons to practice your combat abilities and check your damage potential. There are two varieties you can craft with one hardier than the other (these look different than the Argonian and Khajiit versions found in the Housing Editor purchase tab). There are also lots of other decorative items exclusive to Furnishing Crafting, too.

What can I do with the things I create with Furnishing Crafting?

In most cases, you can place them in your home or trade them with other players. In some cases, they do something a bit special. For example, the skeleton mentioned above is a furnishing you can craft and then fight.

Will we be adding to Furnishing Crafting in future updates?

Absolutely. We are always striving to add new and interesting things for you to create for your homes. New zones or dungeons will typically introduce new plans, themed for the zone or content.