Mounts are used as a method of transportation and storage in the Elder Scrolls Online.

The Elder Scrolls Online features a variety of horses with different pricing and upgrade options accessible from Stables.

Limited edition mounts can also be purchased from the crown store.

Buying and activating a Mount

You must visit a Stable and talk to the NPC in charge. In the dialogue, you will see an option to purchase a mount of varying amounts of gold. You can purchase as many mounts as you want, but you can only have one active mount at a time and must return to the Stablemaster to change your active mount. Summon your mount using the

key or pressing the touchpad on your PS4 controller. You can also rename your mounts via the Stable.

In Black Marsh this mount is called Scales-Seem-Daubed-with-Hist-Sap.  It is the only subspecies of guar known to enjoy music. 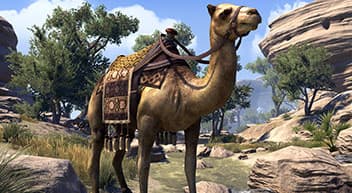 This is the stoic, hard-working beast that riders in the wastes of Hammerfell count on to survive. And if things come to a fight, it's just plain mean. 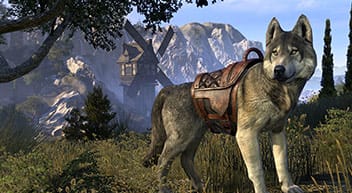 The brown Highland Wolf is common in the Colovian hills and in Cyrodiil's Great Forest, where wild packs are feared by farmers and shepherds. But foresters have domesticated the beasts and, bred for size, use them as mounts. 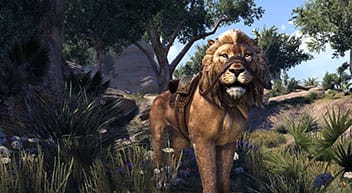 The Pride-King Lions are the top predators on the savannahs of northern Elsweyr. No one but the Khajiiti, with their feline intuitions, could have persuaded these proud beasts to serve as mounts. 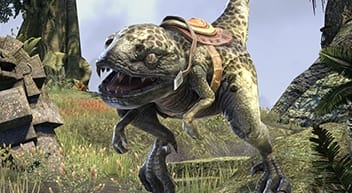 A sturdy, multi-purpose guar, at home anywhere from swamps to the ashlands 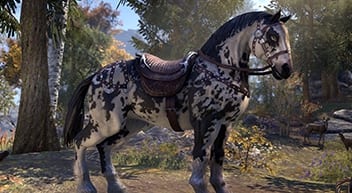 Staunch and vigorous, this patterned war-horse is known for its courage and tenacity. 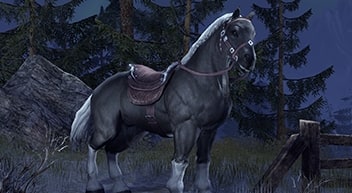 A rare, highly sought cross between a midnight steed and a Skyrim ice-horse. 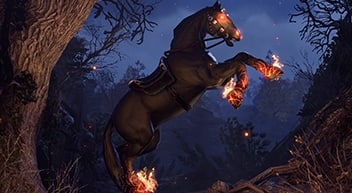 The origin of this horrific mount is obscure, but some see the hand of Mehrunes Dagon in it.

With Patch 6, feeds are now "Riding Skills"
Mounts can be upgraded by visiting a Stable and selecting the Feed option, for a total of 50 times. Feeding will upgrade your mount's speed, stamina and carrying capacity, as well as change its appearance. The rules of feeding are:

Discontinued: This information is left here for curiosity purposes.